Us Restaurant and Lounge Mural in Middletown, CT

Creating the mural at Us Restaurant and Lounge in Middletown, CT was quite the honor since I had painted murals in this same address years earlier for the previous business Titanium. It was nice to create new murals and a new theme for a very large layout.  Working with Earl and Kendra O’Garro, the owners was amazing as well.  They brought an energy to the project that rivaled my own and that says a lot.

Originally this space was painted a charcoal almost black color from head to toe.  Added elements of greys and silvers highlighted the black and then there was the lighting…everywhere.  The NEW look was quite the opposite.  This large space was opened up even more first by painting the entire space white.  With this fresh palette to start a highlight color was added and that color was red.

There were two sets of murals being painted for Us Restaurant and Lounge.  The first was a large scale mural the spanned over 16 feet in length and 3 feet in height.  It was a monster painting in size and it was very evident to me the scale of this piece when the frame arrived in my studio  before I started painting it.  The premise was to create something that embodied family and friends.  Being that the name of the restaurant was “Us” this was a good opportunity toe represent this.  To prepare for this painting I held a photo shoot with all the players.  26 people gathered one night and we lit them in a very dramatic fashion.  It was from these photos that I compiled the composition here.  A modern day “Last Supper” except with a happier ending only at Us Restaurant and Lounge.

The second stage of paintings was very different. The idea was to create similar large murals like the last set for the previous business but more of them this time and with the idea of red being the dominant color.  Using an R&B theme I had a blast painting these.  (6) 8 foot by 4 foot paintings that needed to hang on the walls over 12 feet above the viewers heads.  When we sat down Earl and Kendra O’Garro gave me 6 artists to paint including,  Anthony Hamilton, Jill Scott, Alicia Keys, Tracy Chapman, and Robin Thicke.  Once completed I had my carpenter take on the dubious task of climbing the scaffold to hang them.  This project is one that I am very fond of.  I love that the owners created very personal pieces for the restaurant.  It was not only a challenge but ultimately as an artist a great honor to paint.  I have also had the opportunity to try the wonderful food of Chef Garfield Trout who  is an artist in his own right and all I can say is if you get a chance stop by and order up because it is well worth it! 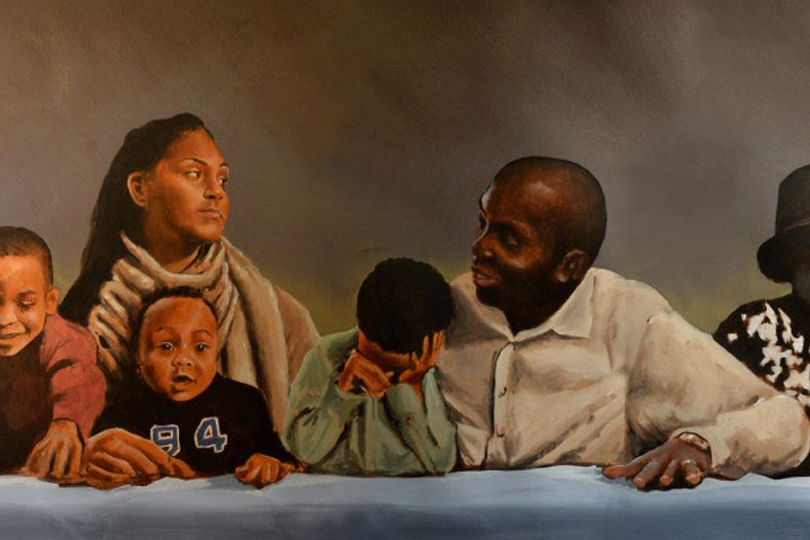