Working on this project for Mike Tyson was so much fun for so many reasons. It really started back in November 2019 when I got a call from Dennis Rodman. It was a Friday and I remember that because I was flying out on Sunday to LA and Rodman called with a very specific purpose. So anyways the phone rings, I answer it and Rodman says he knows I will be in LA and would I do a painting of Mike Tyson and his wife so he can give it to him while I'm out there. At this point Dennis was doing some business with Mike and being the generous guy that he is he wanted to give him something to thank him. Of course I say sure and then scurry to my computer to find pictures of Mike and Kiki that might work as a painting. (48 hours until I leave for LA) I still feel confident I can pull this off and come up with something that they will like. So I find a great image of the two of them and start working on it. Later on the same day I get a called from my friend and agent Darren Prince of Prince Marketing Group. He says, "Pat, can you come to Rhode Island tomorrow? I'll be up here with Chevy Chase and I think you two can work together on some things."

Of course I am not going to turn down this opportunity and Rhode Island is really about an hour or so from my house. Definitely cutting it short time wise but still doable....(rolling eyes, 24 hours till I leave for LA) Saturday morning I head to Rhode Island, meet with Darren who introduces me to Chevy. I hand for a little while and set up an additional meeting with the Chase family for when I get back from LA and head home to finish this painting. (12 hours till I take off for LA)

Now I am at a halfway point on this painting and am finishing it at my home. As the night gets later the lighting shifts and I am just trusting my color palette as I work without natural lighting. 10 PM arrives and I leave it out to really dry up nice for the morning. (7 hours until I depart) I feel pretty good at this point and cant really think much more on it as I am out of time.

A few days into arriving in LA I head over to Tyson's ranch with Dennis and his girlfriend Misty. We walk in through the back of Tyson's ranch and it kind of has an adult playground feel. Real cool space that is large and open. Offices are all located on the outside walls of the room and as we approach the center of the room all I hear from one of the offices is, "Rodman, get in here". It was Tyson.

Entering the office we see Tyson, his wife Kiki and a few other people. Tyson says, Who's this"? (pointing at me) Rodman introduces me and says he has a gift for him. With that being said I unroll the painting.... 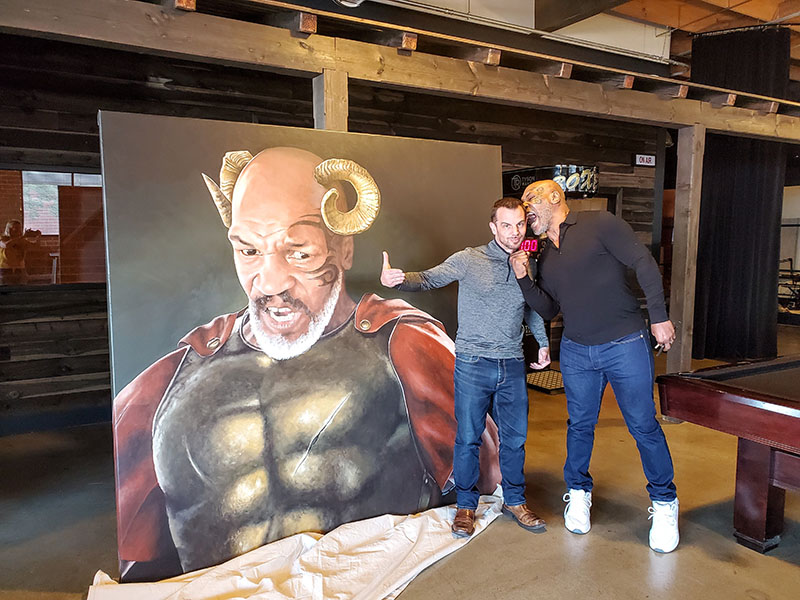