One of the highlights of 2012 for me, so far, was getting a referral to paint a mural for John Daly, the professional golfer from Arkansas who won the PGA Tournament in 1991 and the British Open in 1995.

Known as the wild man of golf, John (aka Long John for his strength off the tee) also has the ability of a surgeon with his short game. He is a true talent in the field and a hero in his hometown.

I was referred by another artist to the Golf Channel, who called inquiring about a mural for John Daly’s home.  The intent was to film this process for an episode of the Dave Feherty show.  After creating a composition that John and his girlfriend approved, I needed to figure the best way to paint this piece.  My studio is 7 feet tall and the painting was over 9 feet tall and 12 feet 10 inches wide. The Golf Channel sent a video camera out to my studio to film the entire process of the painting.  I was also sponsored by Faux Effects out of Florida and happily used their paints to create this mural.  Being a Connecticut mural painter for over 13 years, I love painting large murals and enjoy more the notoriety that came with this project.

One of the interesting elements of this mural was that I had to paint half of it upside down due to the height problem of my studio.  So, flipping the canvas around I completed the second half of the mural upside down, using my digital camera to check for accuracy as the mural progressed.  With a flight booked to leave for Arkansas to install this mural, I had ten days to complete the project.  Mapping out how much painting I needed to have done to finish in time, I felt confident that it would be complete in time for the trip.  Calling ahead, I found a reliable wallpaper installer in Arkansas to install the canvas once I arrived.  Arriving at the airport we found that the oversize canvas would not fit into the plane we were taking and had to travel in a later, larger, flight.  I would be lying if I said I wasn’t a tad nervous about this, but thankfully it arrived safely and I was only asked a half dozen times what I had in such a large package (javelins maybe?).

Making the hour and a half journey north out of Little Rock to Russelville where our hotel was located seemed to take an eternity as we finally arrived at 1 in the morning.  Early to rise, I finally met my correspondent from the Golf Channel, Dave Haas, and the film crew as we headed off to Dardanelle and the home of Golf Pro John Daly!  Arriving at 9 am, we passed the Lion’s Den, John Daly’s golf course across the street from his home.  Entering his home you realize it is a personal representation of who he is, a warm and lived in home.  His daughters were home for the summer and not only friendly but hospitable and extremely helpful.  At the club house we had burgers and met more of the Daly clan, all equally nice and friendly.  A self created compound filled with family seemed exactly like a perfect world to me, one that would make sense as a goal to have from a hugely successful career (or great end game).

To top it all off, the installation of the mural couldn’t have gone better.  Considering all of the little snafus that could come up when doing a mural off site, never seeing the wall it would be on, bring the mural halfway across the country, and installing it with a crew I’d never worked for before, presented so many possible problems.  In spite of my concerns, every step went perfectly and everyone involved seemed thrilled with the outcome! 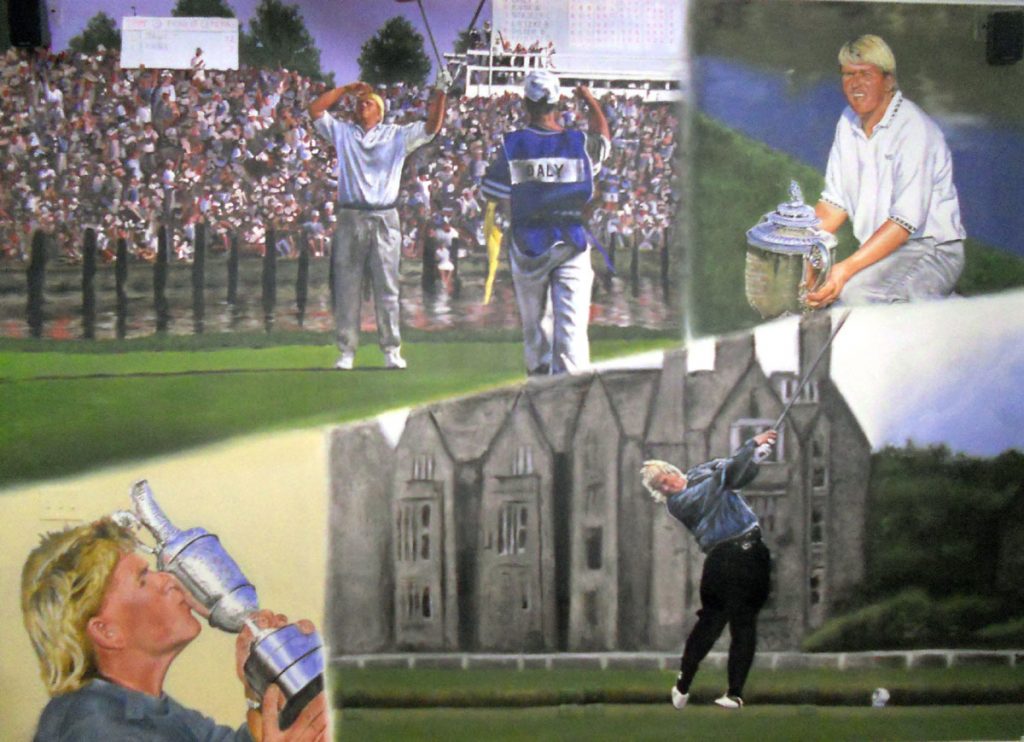