There are some projects that are just fun and this is one of them. I got involved with the Russian Karaoke Bar Jelsomino NYC through a company called iCrave located in New York.

I went to high school with one of the guys who worked for them and touched base with him through Facebook. He in turn got me involved with the Ginza project that was producing this incredible Russian nightclub Jelsomino nyc located on 204 W. 55th street in NY.

I’ve loved working for restaurants and nightclubs ever since I started my business working for clubs in south Florida over a decade ago. The great thing about these commercial products is you can work a bit out of the box, creating a mural design or style that is a bit more whimsical. This New York mural project did not disappoint. I was given renderings of the mural wall and a basic idea of adding an aged graffiti-like element to the wall and making the three doors on the wall disappear. A couple of trips into the city and a few sketches later I had a design that was approved. This New York nightclub mural design depicted images of three icons in the music industry, connecting them with decorative scrolls.

When I arrived to paint this mural I was excited to see such progress since my last visit. Jelsomino Karaoke Bar was starting to look like a wonderful project to be involved in. Everything was looking top notch which added a bit of excitement that it was my turn to add my bit to the Ginza project. The entire mural took me three days to complete with an assistant and I left feeling completely gratified. It was a simple mural that made a big impact for the space. I got a big thrill in signing my name to this one. Since the opening they have been in many newspapers including the New York Post and boast to be a once in a lifetime experience. 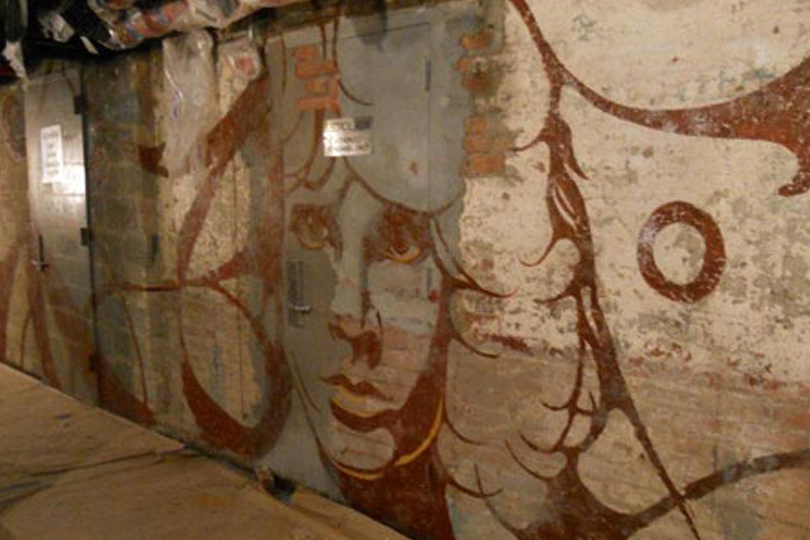