It was the summer of 2011 and I was coming over the Portland bridge into Middletown, CT right before Eli Cannon’s.

As I stopped at a stop light at the end of Main St., I noticed a 3 story building with great potential for a mural. First off, it’s located at a stop light at one of the busiest intersections in town, which means the amount of eyes on it has to be in the thousands everyday. Second, I was having one of those moments where I wanted to paint something that excited me. Not that my last couple project weren’t fun, it was just that they did not have that “wow” factor that gets me excited as an artist. It had also been a couple of years since I painted two 12 story buildings in Brooklyn, NY, which was one of the most physically difficult yet satisfying projects I had ever completed. Also at this time, I was preparing to paint a large mural live at one of the home shows that participate in to promote my business. At the show, painting a large mural live quickly gains everybody’s attention. It works out well as it tends to gather a crowd, but it’s only one weekend and then the show’s over.

So, sitting in my car, looking at this brick wall that lends itself to a mural, I decided to paint a mural on it. Now you might be thinking, “How arrogant!” and you might be right, but I am a believer in failing forward. The name on the front of the building happened to be Eli Cannon’s, which is a really popular bar in Middletown.I was sure it was going to be tough to nail down the owner for approval on this one. Luckily enough, I was able to get a partial approval on the first visit so I was off to create a sketch of what I wanted to do. 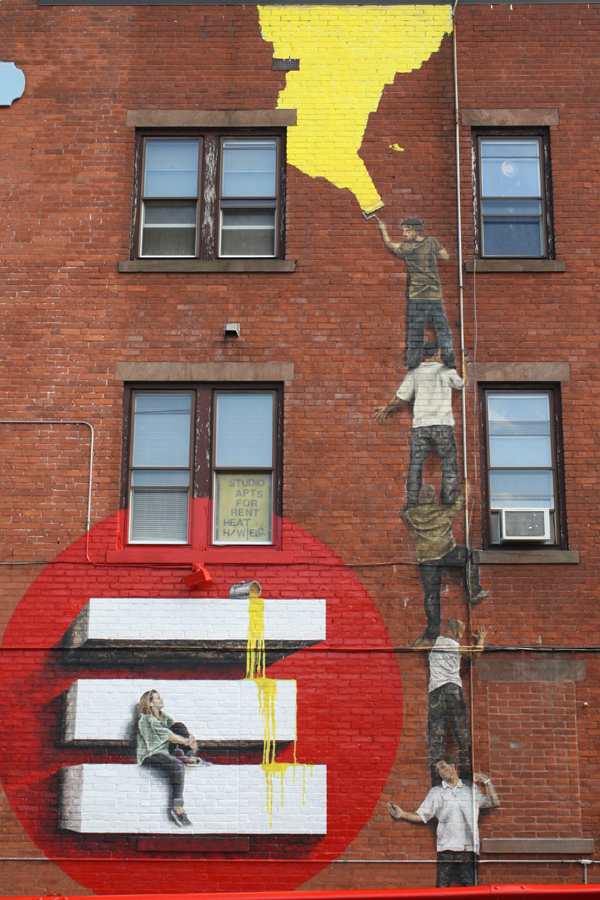